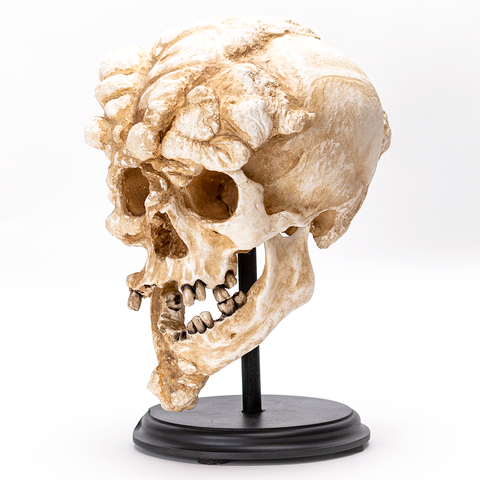 When we discovered the artist John Weisgerber a couple decades ago, we knew we were in for a long and interesting relationship! Weisgerber's background as a special FX artist comes through in every piece he makes. He specializes in weird and wonderful replicas.

The Elephant Man (also known as Joseph Carey Merrick) lived in England during the 19th century and was well known in London society. His severe deformities are believed to have been caused by Proteus syndrome, a rare genetic condition. His official cause of death was asphyxia, most likely a result of sleep apnea. Merrick's life was depicted in a 1979 play by Bernard Pomerance, and a 1980 film by David Lynch.

Weisgerber casts and finishes each of his museum-quality replicas by hand. This piece was originally made by casting a normal skull and reforming it based on reference photos of Merrick. We only ever have one or two of these in stock at a time, since they take so long to make!