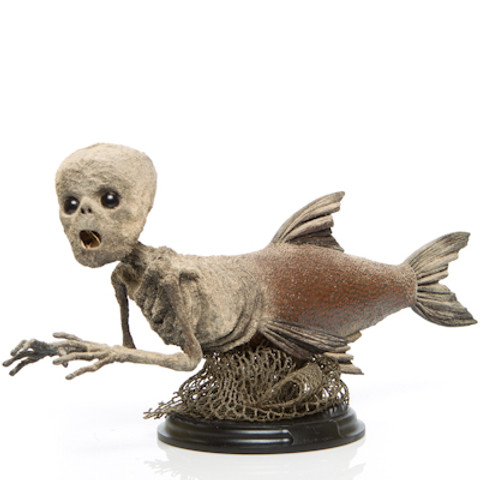 The "original" Feejee Mermaid was so-named by PT Barnum, although it was probably created in Japan. Made by joining half the corpse of a monkey and half that of a fish, the parts were mummified together so that they appeared to be one creature - a Mermaid! The term "Feejee Mermaid" is used generically to refer to this type of hybrid, and several of these odd pieces of gaffe taxidermy may be found in collections around the world, including Harvard's Peabody Museum.

This Mermaid has been skillfully sculpted, cast in resin, and carefully hand-finished for the look of a dusty relic. It is sure to add a great ghoulish touch to a cabinet of curiosities, and makes a fantastic gift for the sideshow enthusiast!