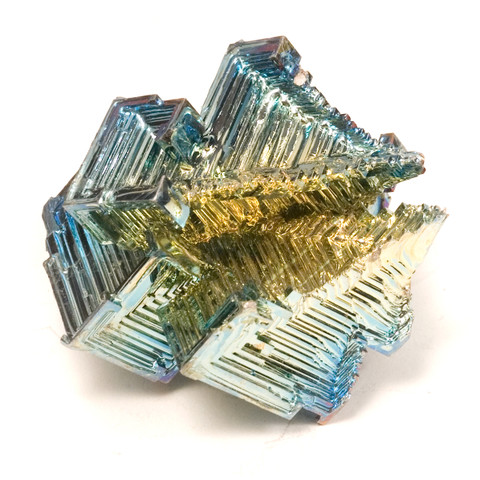 Bismuth is a brittle, crystalline material, classified as a semi-precious semi-metal, that naturally forms into unique geometric shapes. Its refractive properties give it its colorful, oil-slick-like appearance. It is commonly obtained as a by-product in copper, lead and tin mining, and was often confused for lead and tin in ancient times. When burned in oxygen, bismuth burns with a blue flame and its oxide forms yellow fumes.  Scarce as silver, nearly as heavy as lead, one cubic foot of bismuth would weigh over 600 lbs.

These Bismuth crystals are lab-grown in the United States, as natural crystals are extremely rare. Its unique colors and shapes make it a popular decorative item, as well as finding practical usage in medicines, cosmetics, inks, paints, and even fire sprinklers. These one-of-a-kind forms bring more unseen and unusual elements of natural science into home décor.