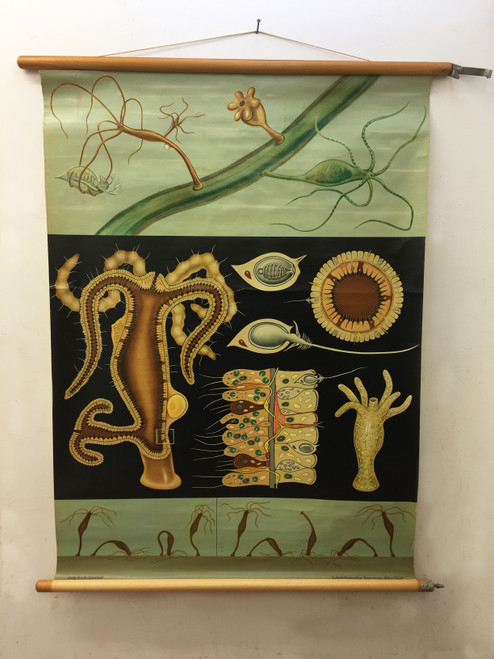 The Hydra is a small, common freshwater predator related to Coral, Sea Anemones and Jellyfish. Found in ponds, streams and other slow-moving bodies of fresh water, it attaches itself to plants, rocks or other objects, and hunts small invertebrates using its tentacles, paralyzing and killing them using Nematocysts, the stinging structures common to Cnidaria. Shown are a Brown Hydra extended (catching Daphnia) and retracted, a Green Hydra, details of the structure of the Hydra, including sectional views of the body, the network of ectodermal nerve cells, and the stinging cell, both ready and discharged. At the bottom are shown methods of locomotion.

They may not seem like much, but Hydras are resilient little creatures. If cut into pieces, each section can grow into a whole animal! This is why they’re named after the mythical creature that Hercules battled.

This large and colorful vintage zoological roll down wall chart of a Freshwater Hydra was designed by Jung, Koch & Quentell and printed by Hagemann Publishers, Dusseldorf, Germany between 1970 and 1979.

Hagemann is internationally recognized for producing educational science charts since 1929.

It is mounted on linen canvas stretched on wooden rods and comes with a cord strung through the top wooden rod for easy hanging. It is in good condition with minimal damage consistent with age and use.