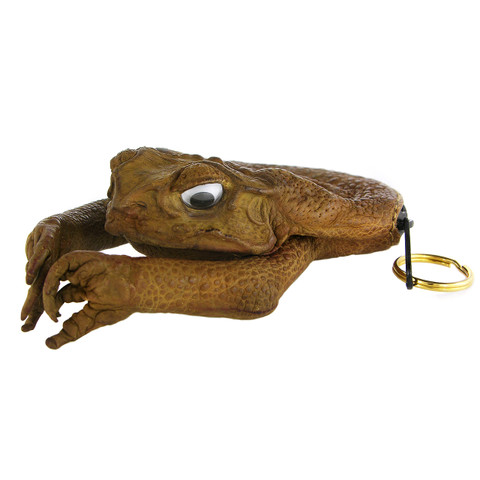 The cane toad, Bufo marinus, is a large, terrestrial true toad native to South and mainland Central America. Relatively recently, it has been introduced to various islands throughout Oceania and the Caribbean, as well as northern Australia. B. marinus is a prolific breeder (females lay thousands of eggs at a time), and an opportunistic feeder with a diet, unusual among anurans, of both dead and living matter. Both features have lead to high reproductive success within the species and, consequently, to the species being considered an invasive one in many different areas where it was introduced (its skin has poison glands, and is toxic to many animals, wild and domesticated). Adult members of this species average 3.9 to 5.9 inches in snout-vent length, with females being among the longer bunch. The largest recorded specimen was 9.4 inches.

Cane toads are routinely euthanized in areas where they’re considered particularly invasive. These purses are clever and intriguing byproducts of said necessary population control. The skins have been treated and are no longer toxic.

A Correlated History of Earth