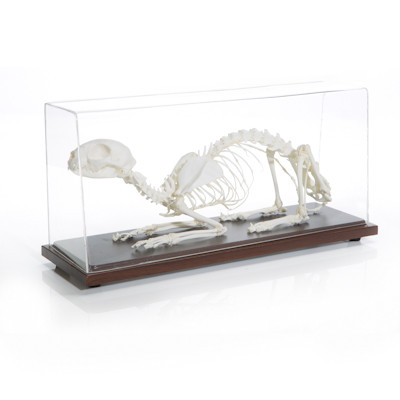 The domestic cat, Felis catus, is one of the most recognizable mammalian species on the planet. They’re often called house cats when kept as indoor pets, or simply cats when there’s no need to distinguish them from other felids (including all cats) and felines (the non-pantherine cats). There are more than 70 different cat breeds, and they vary in size, coloration, shape, and many other factors. Cats boast strong, flexible bodies, quick reflexes, very keen senses, sharp claws, and teeth adapted to killing small prey; they are often valued by humans for their ability to hunt vermin (like mice), and their companionship (they are the second-most popular pet in the United States, behind freshwater fish). Despite being solitary hunters, they are a very social species.

Cats have seven cervical vertebrae like almost all mammals, thirteen thoracic vertebrae (humans have twelve), seven lumbar (humans have five), three sacral (humans have five because of their bipedal posture) and, except for Manx cats and other shorter tailed cats, twenty-two or twenty-three caudal vertebrae (humans have three to five, fused into an internal coccyx). The extra lumbar and thoracic vertebrae account for the cat's enhanced spinal mobility and flexibility, compared to humans. The caudal vertebrae form the tail, used by the cat as a counterbalance to the body during quick movements. Between their vertebrae, they have elastic discs, useful for cushioning the jump landings. Unlike human arms, cat forelimbs are attached to the shoulder by free-floating clavicle bones, which allows them to pass their body through any space into which they can fit their heads. The cat skull is unusual among mammals in having very large eye sockets and a powerful, specialized jaw. Compared to other felines, domestic cats have narrowly spaced canine teeth adapted to their preferred prey of small rodents. This genuine F. catus skeleton is finely articulated and mounted onto a polished compressed-wood base. A clear dome on top completes the casing; this specimen makes for a lovely display.