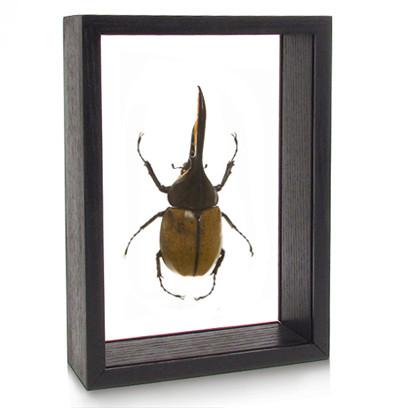 Dynastes hercules, the Hercules beetle, is the largest and most well-known species of rhinoceros beetle (Dynastinae). It’s native to the rainforests of Central America, South America, and the Lesser Antilles of the Caribbean. Reaching up to 6.69 inches in length, it is surpassed by only two other known species of beetle, both in the Cerambycidae family. It is a highly sexually dimorphic species, with females generally being larger-bodied but much shorter because they lack horns. Aptly named after the super-strong mythological Greek hero Heracles (Roman name Hercules), anecdotal reports exist of the beetle being able to carry up to 850 times its own body mass!

Dynastes hercules is a mighty species indeed; grab a specimen of your very own today! Our all-natural, intact specimens (no fake parts here!) are all of first-rate quality, delicately prepared, mounted, and framed with double-glass glazing in our very own fabrication studio in Upstate New York. We model our frames from solid fine ashwood, and they’re available in both a matte-black, and a natural finish.

Our framed insects are made-to-order. Please allow up to two weeks for your order to be completed. If you need your order sooner than this, please contact us at 212-343-1114 x401 or fabrication@theevolutionstore.com and we will do our best to accommodate you!