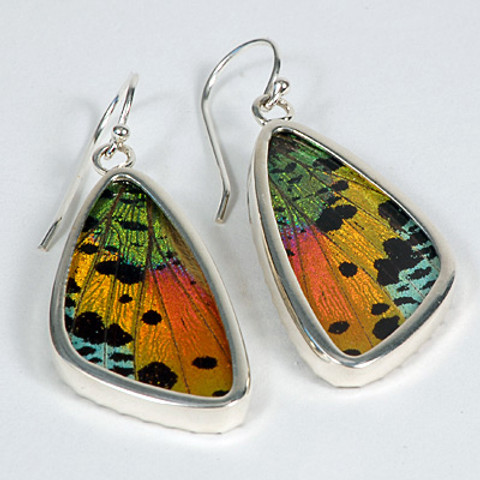 Urania ripheus, also known as the Sunset Moth, is a moth widely considered to be one of the most visually striking lepidopteran (butterfly/moth) species in existence. As members of this species flap their wings, the hues and patterns that the human eye perceives shift, to a bit of a kaleidoscopic effect. Interestingly enough however, much of the color that the human eye perceives off the species’ wings is a result of optical interference; the wings do not actually possess pigment. As such, the wings don’t seem as colorful in subdued light. Being diurnal and so visually striking when irradiated, it has been (and still is frequently) confused for a species of butterfly. It is endemic to Madagascar and can be found throughout most of the year in most parts of the island, with peak populations between March and August.

This moth rivals most butterflies in brilliance and form, and is frequently sought after by collectors. These earrings feature genuine Sunset Moth wings. The bezels are cast from genuine sterling silver, and the wings are encased between two panes of glass so that the coloration and patterning on both sides of each wing can be viewed.