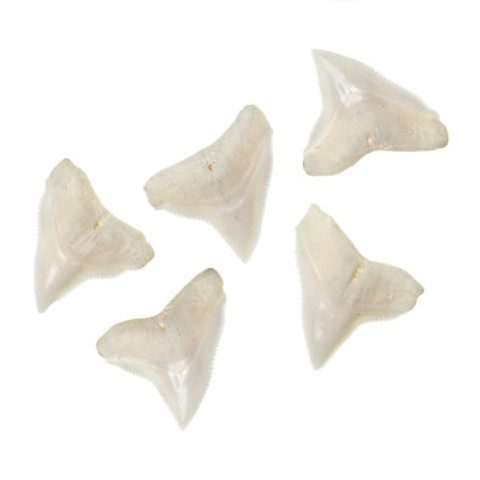 The Bull Shark is found in temperate coastal waters worldwide and it is known for its tolerance for brackish and fresh water, allowing it to swim far up rivers and streams.

Peter Benchley's Jaws was inspired by a famous series of shark attacks in 1916 which are thought likely to have been perpetrated by Bull Sharks. Because it ranges close to shore near where people swim (unlike the deepwater Great White), and because it is a large, strong and aggressive animal, the Bull Shark is considered perhaps the most dangerous shark to humans. Growing over ten feet in length, it feeds mostly on bony fish, though as an opportunistic hunter it will also eat turtles, birds, mammals, stingrays and crustaceans.

Sold singly, these glossy white teeth are typical for a Bull Shark - triangular and blade-like with a wide root and tiny serrations. They are quite sharp and will cut paper!

These tooth are about one inch in length.