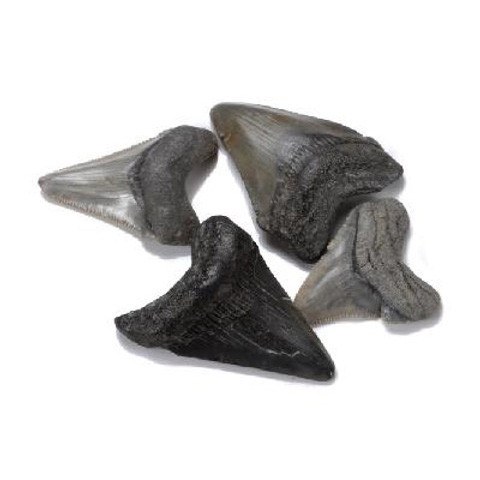 These are the fossil teeth of Megalodon, an extinct giant shark thought to have grown more than fifty feet in length which roamed the seas worldwide between about 25 million and 1.5 million years ago. One of the largest predators that ever lived, it is believed to have fed mostly on whales and probably resembled the modern Great White Shark on a much larger scale.

There are not many teeth larger than those of Megalodon, and they are sought-after by collectors and enthusiasts the world over. Most of our teeth come from the bottom of rivers and bays in South Carolina, but they are also found elsewhere around the Gulf Coast, in Phosphate pits in the desert in South America and Morocco, and even on the bottom of the sea.

Fossil shark teeth are found all over the world and have been collected throughout human history. Popularly known in Europe as "Tongue Stones" or "Serpents' Tongues," fossil shark teeth were used in medicine and as protection against poison.

Each tooth is unique and varies slightly in size, shape and color, but yours will resemble the pictured examples.