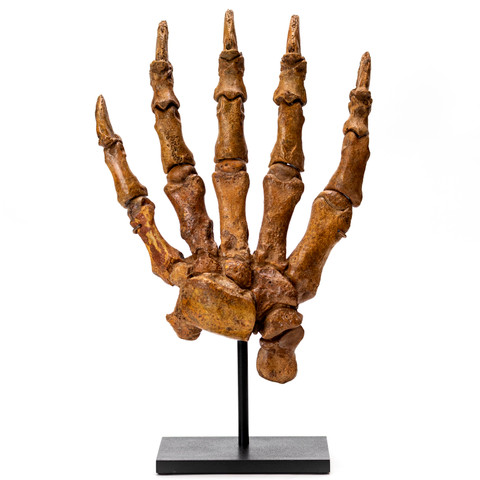 We hand select (no pun intended) each of our cave bear paws. The paleontologist who prepares these for us is known for the quality of his work. Cave bear material is increasingly difficult to find these days, so we're always on the lookout for special pieces like this one.

Did you know that cave bears and cavemen coexisted? One of the current theories is that they were hunted to extinction, even though they appear to have been a fearsome predator! Also, death during hibernation was a common end for this Pleistocene Epoch creature, forced to seek shelter from the cold Romanian winters.

We had a custom iron stand made in order to display this enormous paw in all its glory. Each finger is threaded with sturdy wire, so it's safe to ship anywhere in the world. This is a one-of-a-kind piece, and we don't know if or when we will be able to get another.