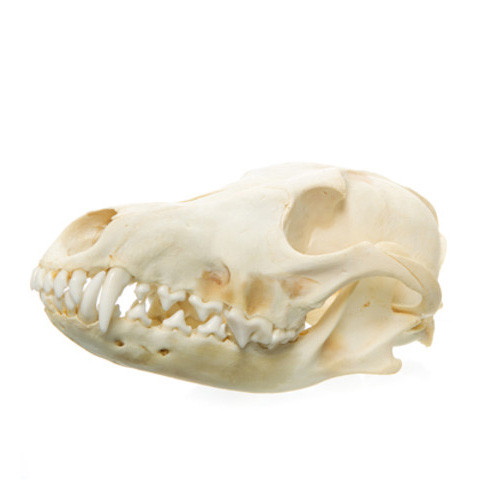 The Coyote is found widespread across Central and North America. Despite constant human encroachment, coyotes have flourished as a species and even reproduce in metropolitan areas. In fact, the human reworking of the North American landscape, eliminating most Wolf populations, has probably allowed the humble Coyote to expand its range enormously. The Coyote is an opportunistic, versatile carnivore, and feeds mostly on small animals like voles, squirrels, birds and mice. It will also eat carrion or attack large animals such as deer or livestock, and pet owners in many parts of the country know that cats and small dogs are quite vulnerable. Socially, too, it is adaptable, hunting in packs in habitats frequented by larger prey, but singly or in pairs in pursuit of smaller game. Males and females are both considered sexually mature at one year old, but most do not breed until their second year. Females have one period of Estrus yearly, and the average litter size is 6 pups. Like Wolves, Foxes and feral Dogs (with all of whom it is known to interbreed) it is considered a pest by farmers who raise sheep or chickens, and has been hunted and trapped for its fur since long before Europeans ventured into the Americas.

These are handsome skulls, obtained as by-products from a small family business in the fur trade. Not as carefully prepared as our first-quality skulls, they may show small defects such as missing, worn or chipped teeth, or slightly discolored bone, but these are among our most popular items. Perfect for study, they make interesting rustic decor, objects for still-life imagery, or additions to your skull collection!

These skulls come with the jaws held in place using hot glue, which helps keep them complete and is usually easily reversible using hot water.