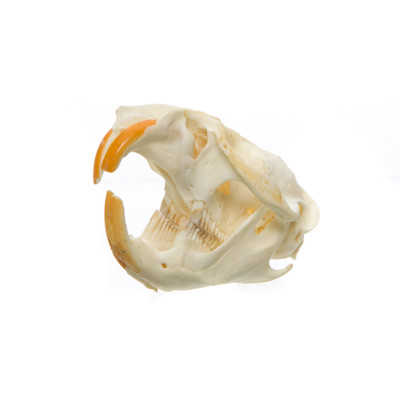 The common muskrat, Ondatra zibethicus, is a medium-sized semi-aquatic rodent that thrives in wetland habitats throughout North America. Its common name refers directly to the “musk glands” found in the lower abdomen that it uses to mark its territory. The muskrat builds nests to protect itself and its young, sometimes underground and sometimes above ground with an underwater entrance (similarly to beavers and their lodges). Well-adapted to aquatic life, again like the beaver, it has two layers of thick, waterproof brown fur to protect it from cold water, as well as semi-webbed toes and a powerful tail that helps propel it through water like a whip. Despite being considerably similar to the beaver in mannerisms and general appearance, one can tell the two rodents apart by their size, ears, and the shape of their tail. The beaver is much larger, its ears are more prominent, and it has a broader, more paddle-like tail than the muskrat (the latter’s tail is long and narrow). The muskrat’s diet consists primarily of marshy vegetation, but also small crustaceans, fish, and frogs.

The average adult muskrat’s skull is about 2.4 inches long, and 1.6 inches wide. Each of its front incisors is about 3mm wide and between 15 and 20mm long. An elongated maxilla and mandible project the incisors away from the muskrat’s much smaller premolars and molars; it has no canines. Our muskrat skulls are obtained as by-products of fur trade and population control (the muskrat is considered a pest in many different regions). They would’ve been discarded otherwise; we fumigate and treat them in our very own fabrication studio. These handsome skulls are not only perfect for study, but also make very intriguing, rustic decor. Add one to your collection today!