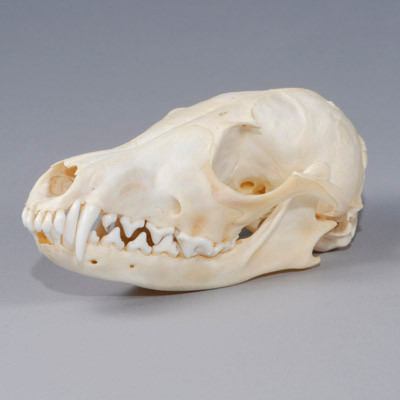 The red fox, Vulpes vulpes, is the largest species of true fox and the most widespread carnivorous species in the world. Its range spans prairies, forests, tundras, deserts, and even urbanized areas. Known for its cunning, it’s an opportunistic feeder that will not only steal, but also consume sedges, grasses, fruit, and seeds if the small mammals, birds, fish, and amphibians that it usually hunts aren’t available. As its common name suggests, the red fox generally has a reddish-brown coat but can also, albeit less commonly in the wild, be found with white (often confused with the arctic fox) and silver-gray coats. The species is a notorious carrier of the Rabies virus, and is considered one of the most invasive species in the world (particularly when it comes to farm areas). However, it is also a major source of profit within the fur trade. Fox skulls are, on average, fairly narrow and elongated with small braincases. Their canine teeth are relatively long. Females generally have smaller skulls than males, but with wider muzzles and also longer canines.

Our fox skulls are obtained as by-products of the aforementioned fur trade. They would have been discarded otherwise; we fumigate and treat them in our very own fabrication studio. These handsome skulls are not only perfect for study, but also make very intriguing, rustic decor. Add one to your collection today!