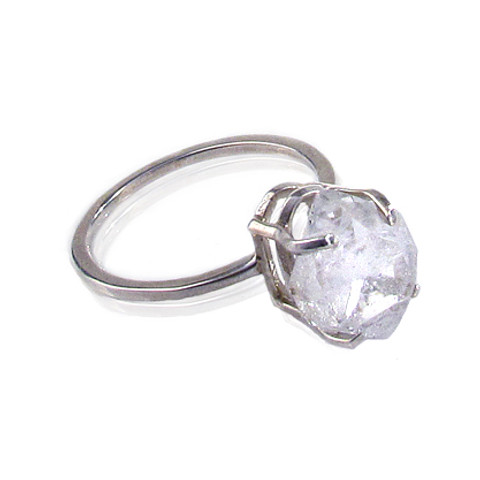 Herkimer Diamonds are not diamonds at all, but small double-terminated quartz crystals named for Herkimer County, New York, where they are found. Double-terminated crystals of quartz are fairly rare, and these pieces are quite collectable. Long known to the Mohawk Indians in the area, the crystals formed in small hollows in the Little Falls Dolostone, a formation some 500 million years old. Similar crystals are found in Afghanistan, Tibet, Ukraine and Norway, among other places, but true Herkimers are still especially valued.

The Herkimer Diamond Solitaire is a playful take on the idea of a Diamond Solitaire Ring. Made from square-stock silver, with a simple cage-setting it has a minimal, industrial chic. Made right here in New York City, it is a popular piece with our customers, and just a great ring! If we don’t seem to have your size in stock, let us know and we should be able to get it for you. We also offer Herkimer Diamond Earrings.