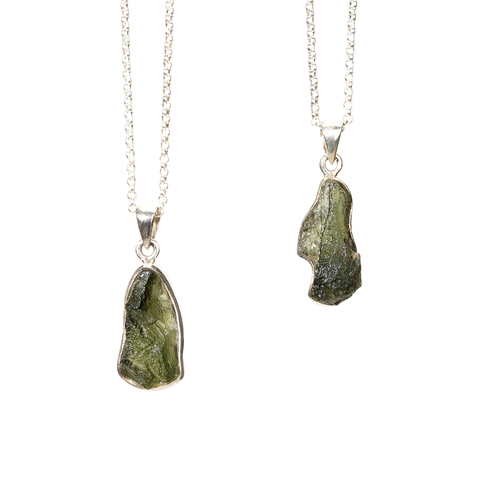 Moldavite is not a meteorite, but rather a unique byproduct of a meteorite’s impact on the Earth’s surface 15 million years ago. It is a type of natural glass formed from terrestrial debris ejected during meteoric impact, otherwise known as a tektite. Splatters of the material that was melted by the impact of the meteorite that hit southern Germany cooled while they were airborne, creating Moldavite’s unique, green, translucent appearance. The total amount of Moldavite scattered around the world is estimated at 275 tons.

These Moldavite shards are set in 925 sterling silver on a silver plated chain. Each piece is unique, retaining their original forms from 15 million years ago, creating an otherworldly allure rife with science and history.