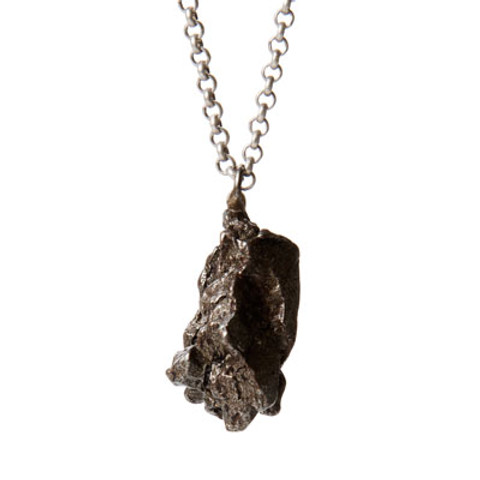 The Campo del Cielo refers to a group of iron meteorites, and to the area where they were found, 620 miles northwest of Buenos Aires, Argentina. The crater field covers an area of approximately 35 square miles, and contains at least 26 craters (the largest being a little more than 6 square miles around). The craters are estimated to be between 4,000 and 5,000 years old. These craters were first “discovered” by a Spanish military expedition in 1576; they were, however, already known to the aboriginal inhabitants of the area. The total weight of the pieces recovered so far from Campo del Cielo exceeds 100 tons, making the meteorite the heaviest one ever recorded on Earth. Scientists believe that, like other iron meteorites, the Campo del Cielo mass probably originated within the Asteroid Belt located between Mars and Jupiter.

Larger pieces of the meteorites are repeatedly heated in hot water to temperatures above 150 degrees Fahrenheit, and cooled in liquid nitrogen to temperatures below -300 degrees Fahrenheit, in order to weaken them along natural fault lines formed in the undisturbed void of outer space over billions of years. Each piece is then struck with great force and shattered along those fault lines into fragments, each with a unique shape. We then set each resulting fragment as a very handsome pendant on a silver-plated chain in our Walton, NY fabrication studio. Only about 5% of meteorites are composed of iron! Material of this sort and source is rare, and highly collectible. However, a piece of your very own from Campo del Cielo is only a few clicks away!

Sikhote-Alin Meteorite in a Vial