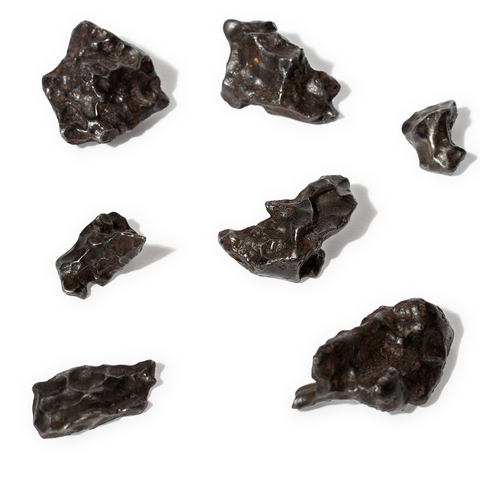 Sikhote-Alin meteorites are classified as iron meteorites, as they're mostly composed of this element. They're named after the Sikhote-Alin Mountains in Russia where they were found. The meteor that produced these meteorites fell to the earth in 1947, and is the largest witnessed fall ever. The meteor is believed to have weighed an astonishing 23 tons before impact. The cacophonous sound from the crash was heard nearly 200 miles away.

Thumbprinted specimens such as these are the most highly collectible. Specimens are called "thumbprinted" because of the concave indentations on the surface of the meteorite, similar to the effect observed when someone presses a finger into a ball of clay. Specimens such as these broke off of the main object early in its descent, which produces a beautiful dark fusion crust. To date, 100,000kg of Sikhote-Alin meteorites have been found. Sikhote-Alin meteorites are some of the rarest types of meteorites in our collection and we are only able to source a limited amount.

Sikhote-Alin Meteorite in a Vial