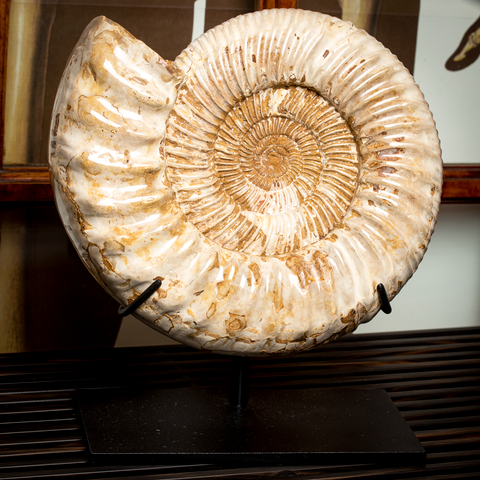 Perisphinctes, which flourished during the Jurassic, are found in many places around the world. They have striking ribbed shells and specimens from Madagascar often have a chalky white exterior. These pieces come from a new location, and the outside of the shell can be polished smooth, making them unusually lovely and tactile. Ammonites are an extinct group of marine animals similar to the nautilus. Like the nautilus, ammonites had a soft body with tentacles that emerged from a hollow chambered shell utilized in the manner of a submarine's ballast tanks. Ammonites are often identified by their shell ornamentation and the structures of the wall that divide the shell's chambers.

Ammonites are named after the Egyptian god Amun, whose attribute (rams' horns) they were thought to resemble, and their fossils have been collected since prehistoric times. Ammonites are among the most common fossils, being plentiful in locations all over the world. They became extinct at the end of the Cretaceous period, the same time that the dinosaurs disappeared. Evolution carries a wide variety of unique ammonite specimens!