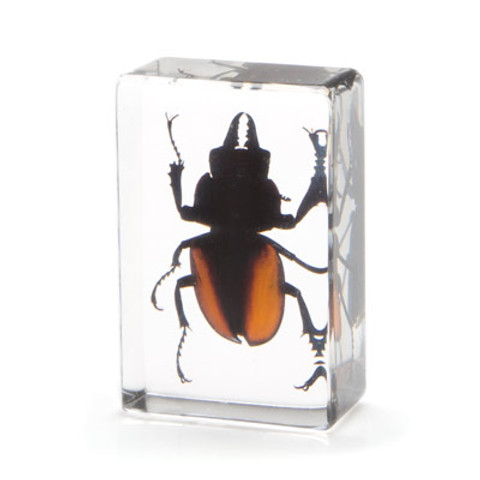 Stag Beetles are so-called because males bear large, sometimes extravagant mandibles - vaguely resembling antlers - which are often used in wrestling matches over females and territory. Though fearsome to look at, Stag Beetles are basically harmless to humans. Females lack the oversized mandibles of males, and lay their eggs in rotting wood, where the young hatch and survive for years as grubs before pupating and emerging as adult beetles. Stag beetles are raised, bred and kept as pets in many places around the world.

Odontolabis cuvera is known as the “Golden Stag Beetle” because of its orange-ochre elytra (or wing-covers). Native to Southeast Asia, this beetle is commonly kept as a pet. Males may mature to have three distinctive types of different-sized mandibles, but have a wider head and are generally larger than females. Embedded in clear Lucite resin this handsome Beetle makes an excellent little decorative piece or educational display!